Adult film star Stormy Daniels sued Donald Trump Tuesday, alleging that he never signed the nondisclosure agreement that his lawyer had arranged with her.
The civil suit, filed in Los Angeles Superior Court and obtained by NBC News, alleges that her agreement not to disclose her “intimate” relationship with Trump is not valid because while both Daniels and Trump’s attorney Michael Cohen signed it, Trump never did.

Stephanie Clifford, known professionally as Stormy Daniels, signed both the agreement and a side letter agreement using her professional name on October 28, 2016, just days before the 2016 presidential election. Cohen signed the document the same day. Both agreements are appended to the lawsuit as Exhibit 1 and Exhibit 2.

The “hush agreement,” as it’s called in the suit, refers to Trump throughout as David Dennison, and Clifford as Peggy Peterson. In the side letter agreement, the true identity of DD ( Stormy Daniels ) is blacked out, but Clifford’s attorney, Michael Avenatti, says the individual is Trump.

Each document includes a blank where “DD” is supposed to sign, but neither blank is signed.

According to the lawsuit, which Avenatti announced in a tweet, Clifford and Trump had an intimate relationship that lasted from summer 2006 “well into the year 2007.” The relationship allegedly included meetings in Lake Tahoe and at the Beverly Hills Hotel.

The 2016 hush agreement directed that $130,000 be paid into the trust account of Clifford’s then-attorney. In return, Clifford was not to disclose any confidential information about Trump or his sexual partners to anyone beyond a short list of individuals she’d already told about the relationship, or share any texts or photos from Trump.

The suit alleges that Cohen has tried to keep Clifford from talking about the relationship as recently as Feb. 27, 2018.

“To be clear, the attempts to intimidate Ms. Clifford into silence and ‘shut her up’ in order to ‘protect Mr. Trump’ continue unabated,” says the suit. “On or about February 27, 2018, Mr. Trump’s attorney Mr. Cohen surreptitiously initiated a bogus arbitration proceeding against Ms. Clifford in Los Angeles.” Binding arbitration is specified as a means of dispute resolution.

Clifford and her attorney, Michael Avenatti, are asking the Los Angeles County Superior Court to declare that both the hush agreement and the side agreement “were never formed, and therefore do not exist, because, among other things, Mr. Trump never signed the agreements.”

“In the alternative, Plaintiff seeks an order of this Court declaring that the agreements in the forms set out in Exhibits 1 and 2 are invalid, unenforceable, and/or void under the doctrine of unconscionability.”

The suit also says that Trump must know that Cohen is trying to silence Clifford, since rules for the New York bar, of which Cohen is a member, require him to keep his client informed at all times. “[I]t strains credulity to conclude that Mr. Cohen is acting on his own accord and without the express approval and knowledge of his client Mr. Trump.”

Avenatti, during an interview Wednesday on “Today,” said the suit, if successful, would allow his client to “tell her story.”

“Stormy Daniels believes it’s important that the public learn the truth about what happened,” he said. “I think it’s time for her to tell her story and for the public to decide who is telling the truth.”

The White House did not immediately respond to a request for comment. President Trump’s outside attorney, John Dowd, declined to comment on the lawsuit. 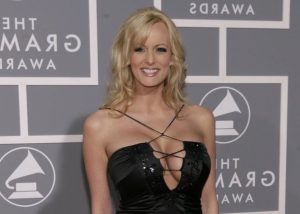 An Interview with a Popular Cam Girl – Minnie St. Claire